Usually, this happens when you go to a mega-city, like London or Chicago…when there’s so much to do that you don’t know where to begin. You come home and people ask you how it’s been but you have no idea what to say, not because you did nothing, but because you did way too much. Ubud is not a mega city. In fact, it’s more like a small village. It’s not close to a beach and you have to cross what seems to be a rain forest to get there. Yet once you arrive, it’s like entering a bit of a new world. I was looking for a picture to portray my days in Ubud. I couldn’t find one. The closest I got is the one below. Yet you don’t see the rice paddies around that marvellous place that I had stumbled upon while walking aimlessly through fields of joy (well, that’s a Lenny Kravitz line, it was obviously fields of rice). You also don’t see the satay that had I just eaten or the green melon juice that I was drinking. You don’t see the bed that I was lying on, or the view from the window. Just my legs crossing each other and some art on the wall. But I tell you, it felt good.

Right. So where do I start then? Since I mentioned them – maybe with the Rice Terraces. You might wonder, what on Earth is so spectacular about some rice paddies? That’s certainly what I thought when I first read about Ubud. Walk through the rice? For hours? And why would I want to do that exactly? Well – because once you are there, you don’t want to leave. Take a bike and just enjoy. It’s such a quiet peaceful place. I was in the middle of a huge rice field at some point and suddenly I found some little wooden shed. I got close to it, and there was someone guarding the field in there. He was sleeping like a bear. It made me laugh. It also made me go away quickly because I had no idea what he might be up to if he wakes up and sees me.  You can see the shed in the third pic below. 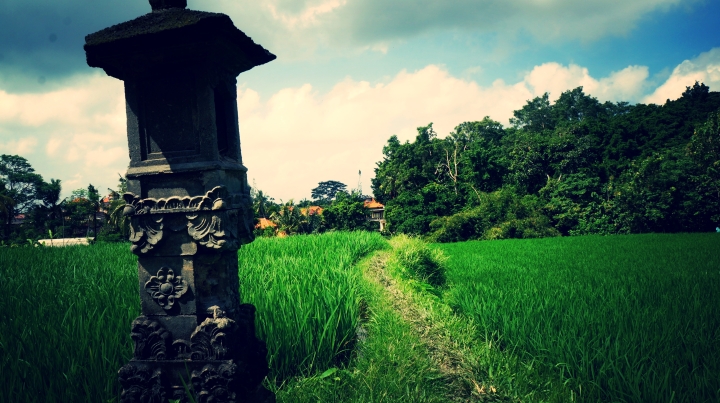 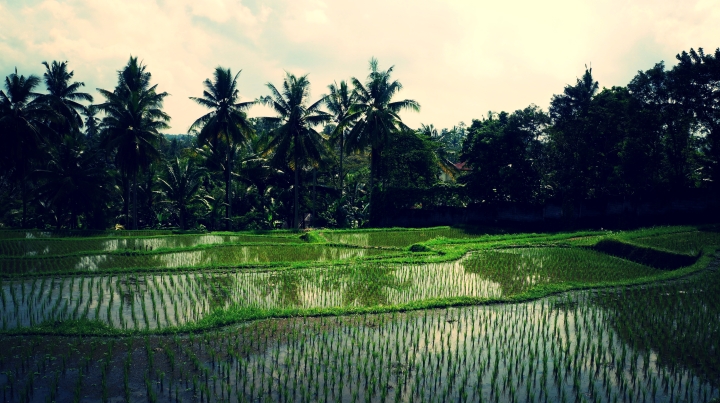 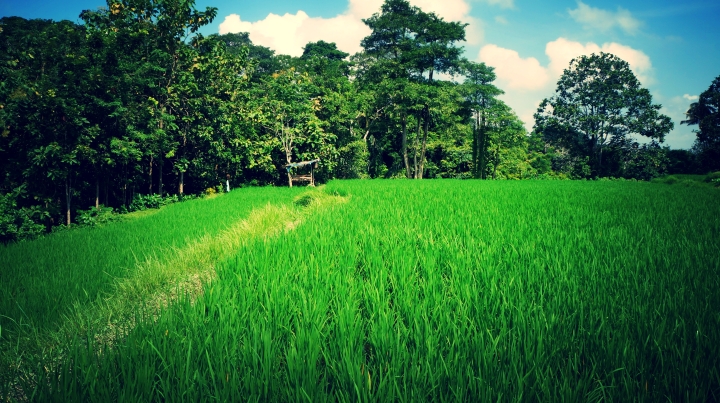 Rice field shed with guard ‘watching’ over the field

Next – a little about Ubud itself. Ubud is the place of what feels like a million Temples. No matter what street you find yourself on, you will stumble upon something great. You might just want to venture inside and it might be a little guest house or hotel.

My little home stay was just behind this door. Can you imagine? And inside, there was this:

Now waking up every morning to this view was quite something. Not to mention the breakfast and the wonderful hosts. It was called Budi’s House by the way, and I can only recommend it warmly. Cheap, clean, spacious, friendly and probably the best location you can find in Ubud, just off Jalan Dewi Sita. Also, all the other guests here were incredibly nice and friendly but more about that later.

Other than guest houses, there are proper temples of course. Such as the Water Palace for example. Stunning temple and it hosts every night an incredible Balinese dance show. There’s a Starbucks right in front of it though which ruins the atmosphere a bit. Yet, as I said, there are a million other little temples and artefacts and dragons at every corner. Just keep your eyes open. The architectural detail of Ubud is incredible and it makes you (or well, it made me) wonder how life must have been here a few hundred of years ago. 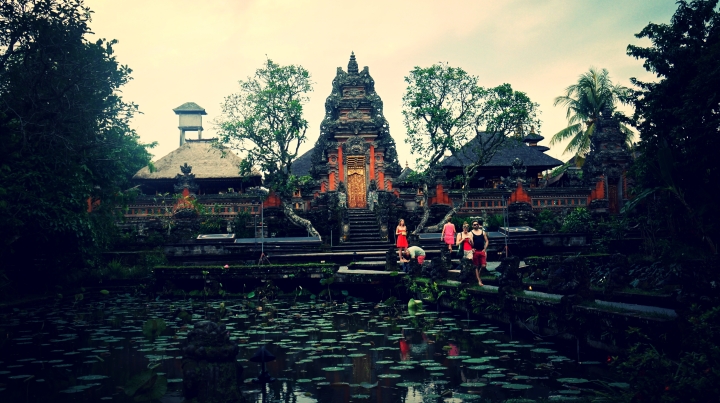 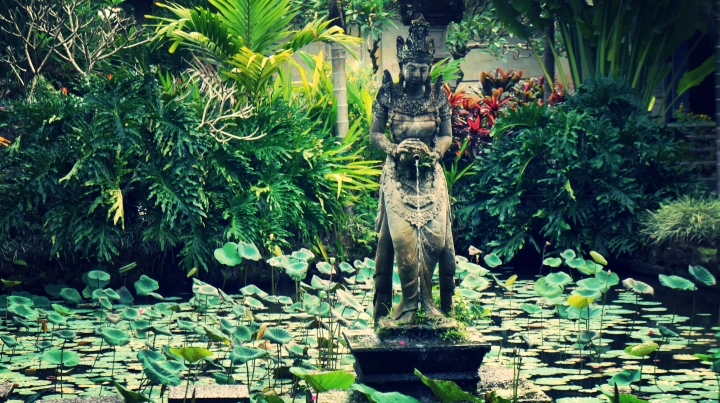 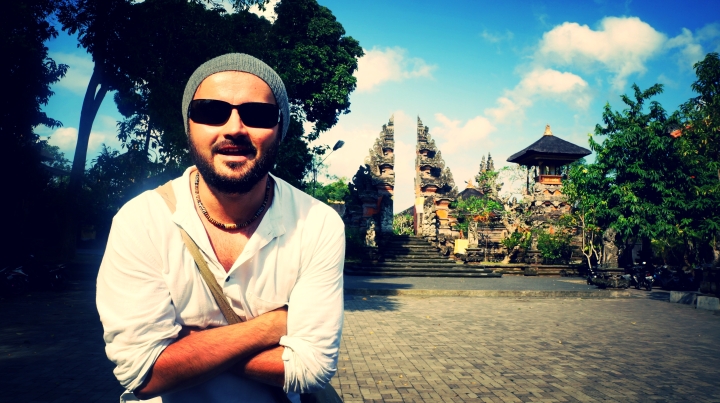 In front of the gate to a temple or a market right by a large bus station. A very cool jazz cafe with live jazz every evening is close-by 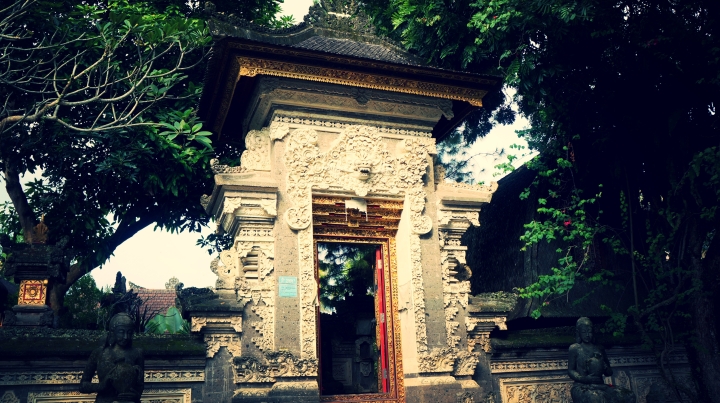 Gates to gardens discovered while roaming random streets of Ubud

Another little temple in Ubud 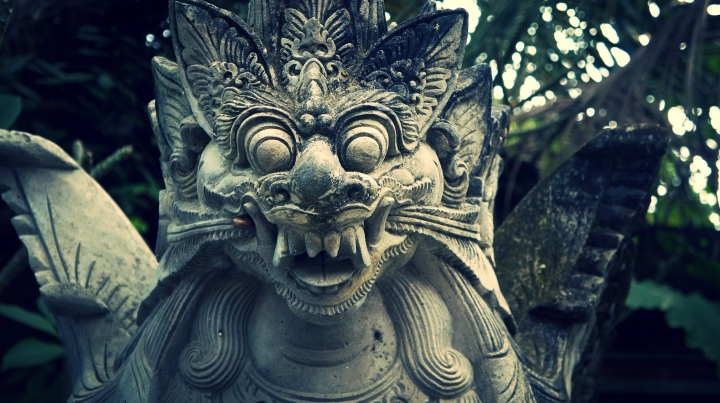 Detail of a Barong – the Bali mythical king of spirits. (This is the good guy and you will see representations of him at every temple, gate or door in Ubud. If, like me, you are fascinated by mythology, you will love reading how Barong fights Rangda, the demon widow queen who looks just as crazed, but more like she was using the angry mushrooms. Ah, and just in case, this was not meant to sound disrespectful but mushrooms were a very common enhancer of religious ceremonies in Bali, they are legal and can even be found on the menus of very respectable establishments. Just saying.)

Arts. Ubud and the villages around it are famous for being art incubators with century old traditions. There’s a number of reasons for this.  I don’t want to venture too far out of the window here since I only had very superficial conversations on this,  however, towards the end of the 19th century and early 20th century, some European painters found their way to Bali.  Most notably, a German primitivist called Walter Spies who then attracted a whole suite of other artists. These guys, I think primarily Dutch and German, interacted heavily with the local painters, leading to a symbiotic style of painting. The most important Balinese artist was Gusti Nyoman Lempad. He was also a sculptor and the architect responsible for a significant number of temples around Ubud too. The guy lived well over 100 years (and, allegedly, picked the time of his death, previously asking his family to bath him so he could be clean at the time he left). There is an entire museum dedicated to him and his descendants close to Ubud. Also, the Agung Rai Museum of Art has an entire Gusti Nyoman Lempad wing. I can highly recommend visiting this museum. It is situated in a gorgeous garden and some of the paintings and exhibitions are incredible. The shots below were taken in this museum. While the entrance fee is 70,000 IDR – it is absolutely money well spent if you have any penchant for arts, especially primitivism. 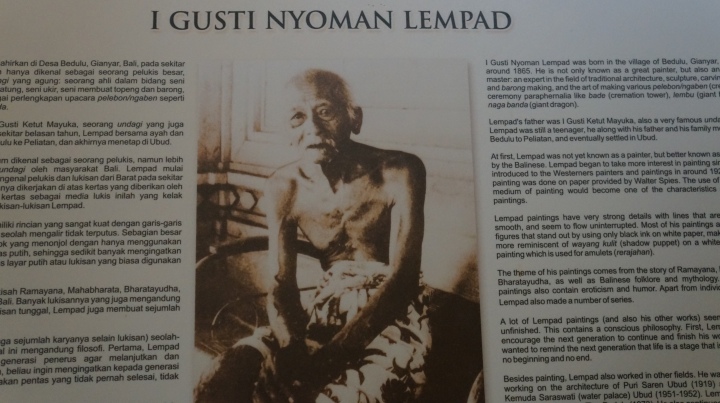 The artistic side of Ubud is ubiquitous though. It’s not just markets, museums and galleries but also cafes and restaurants are filled with little gems that you can’t but be impressed with. The two shots below are from al litle cafe on Jalai Dewi Sita – called Bolero Resto Bar. Plastered with Balinese photography from 100 years ago, this place just exhumes this ‘lay-back-and-enjoy’ attitude that is so typical for Ubud. Opposite it is Cafe Havana. While not necessarily the most ‘Balinese’ of places, it still feels like it perfectly belongs to the setting. Paintings of Che Guevara are on every well (including a painted reproduction of Guerillero Heroico) and there’s an incredible live band playing Cuban music here every night and people gather and dance salsa or take classes. At some point I will upload the clips that I filmed so you can hear for yourself. The food here was delicious too. 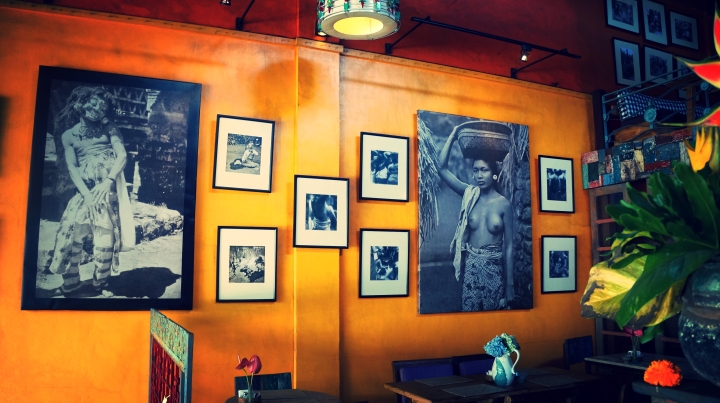 Bolero Resto Bar – photographies on the walls of the lower ground 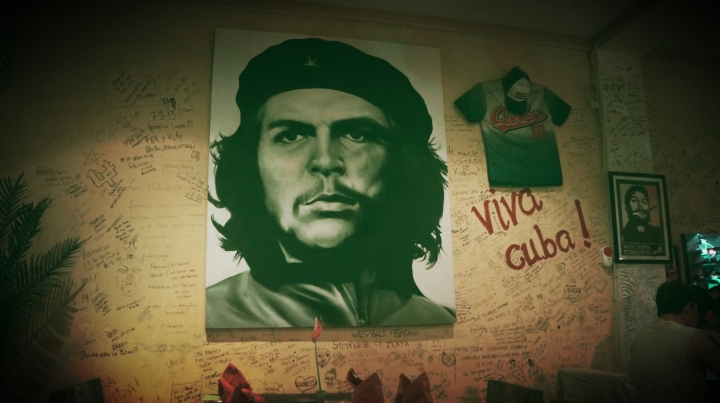