This post is about the Monkey Forest in Ubud. I decided to keep it separate simply because Ubud was a lot more about music, food, arts, temples, architecture and some form or generic quiet time. Not in a bad way, but Monkey Forest is the total opposite.

After a 15 minutes walk down Monkey Forest Road you reach a big gate covered in monkeys. That’s the entrance. People sell bananas outside so you can feed them when you go in. No need to do that really. There’s banana inside, plus they will jump on you at some point, whether you feed them or not. And then, these little crazy creatures are everywhere. They’re noisy and stubborn and by no means are they afraid of you. In fact, if they wanted to, they could easily destroy you. Or at least that’s their attitude. You go in there, feed them, praise them, talk to them…they must be your gods! At least that’s how they act. Cheeky cheeky little monkeys.

At the same time, they reminded me a lot of humans. The way they ate. The way they focussed on certain things and completely ignored others. The way they were taking care of each other. The way you could tell the young ones apart from the old ones, males from females.

I only spent about 30 minutes inside Monkey Forest. I was on a rush, had to catch a shuttle to the airport. I even contemplated not going just so I could get some extra sleep after what was an amazing football night with Germany destroying Brazil 7-1 at the world cup. In the end I did, and I’m so glad. It was a totally great experience. And it’s not a big circus or whatever you might imagine. It’s like entering a world where a different species is dominant and you are just a guest there. They tolerate your presence, but you’re never one of them. Maybe I interpret too much into it, or maybe it had just been a long night, but I found it fascinating. Below are a bunch of portrait-type shots I managed to capture. Good memories. 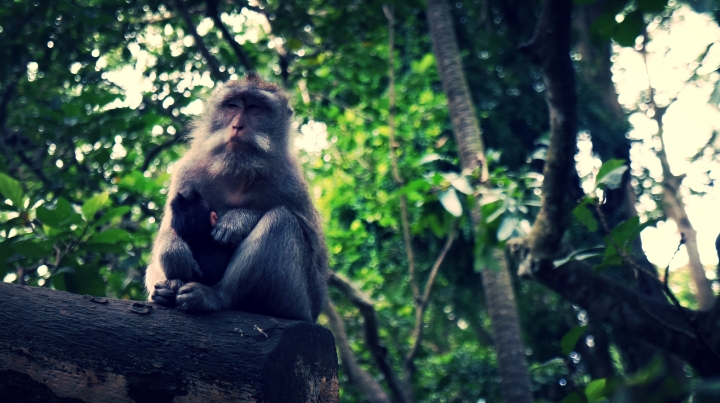 Old, bored looking male contemplating what to do