Bali – Island of the Gods

Bali is incredible. Yes, it does have horrendous parts, yet I don’t think I’ve ever been to a place more diverse, inspiring and welcoming than this little Indonesian Island. This post is about the rest of Bali. Not Kuta, Legian or Semyniak, not Ubud either. Just roads, temples and other places I found while being here. And I’m not going to write a lot [that’s the intention], but just post some of the pics I shot, tell you one cute story about a “cheeky little monkey” – not the kind you find in the Monkey Forest though – and explain how Luwak coffee is brewed and what it tastes like. So let’s get it on.

At some point while in Ubud, I wanted to venture out of town and explore the surrounding areas. There were a couple of places on my list and I was looking for an organised tour or something like that. Unfortunately, I haggled to the point where there were no spaces left – yes, just like bluffing at poker, sometimes you may outsmart yourself. The next day, I decided to look for a private driver. Earlier that week, I had met these three Belgian girls. One of them was Lien and she was climbing a mountain that morning. Yes, some people do that kind of things on holidays. Her friend Annelien, however, was very much interested in joining. So we went out and negotiated with a couple of taxi drivers until we found one for 350 000 who would take us to a couple of temples and a couple of places that he thought were great. We jumped into his Toyota and off we went.

Talking to him, we found out that his brain only had space for two languages – English and Bahasa. He hated tattoos and said that no person from Bali should have them especially not his two children. They were also not allowed to ever drink or smoke, and contrary to what we believed, he felt very much Indonesian. We somehow thought Balinese people were a bit like the Scots, the Catalonians, the Bavarians, or the Hungarians living in Romania – always thinking they are better than the rest and wanting their own separate country ( 😛 take this with a pinch of salt if you’re from any of those places). Well, it turns out, we were very wrong. Bali is proud Indonesian territory. And below is our good man, a bit of a mug-shot I took half way through our journey. 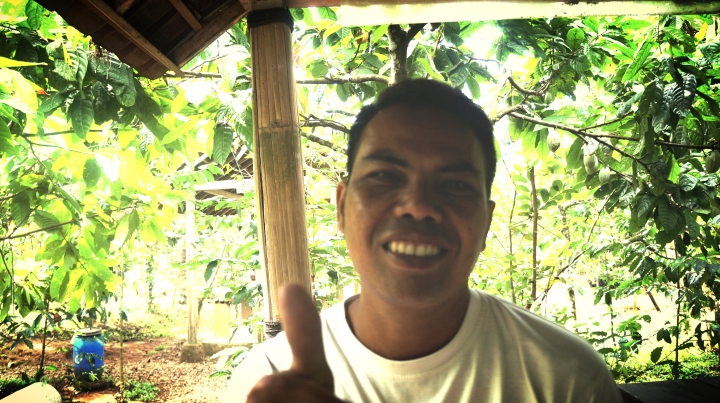 The first stop was on the top of a hill. It was cloudy that day and while we were driving up the mountain, it got foggy. When we got out of the car, we saw a little bit of this. I have no clue where exactly we were, but it was a gorgeous view. And it felt like a cool spring morning in the Swiss alps. 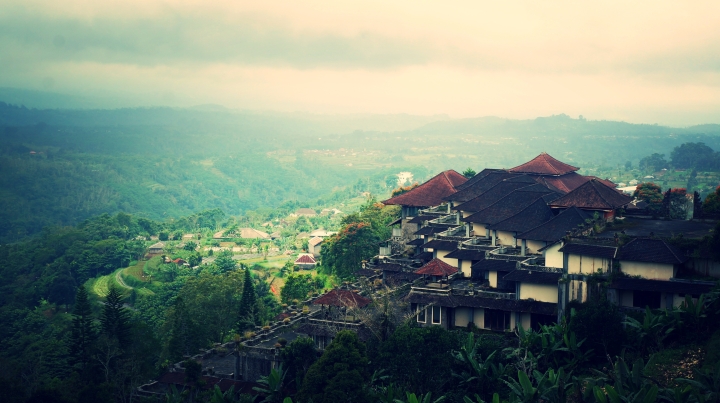 Right on top of that hill was a little girl, the cutest little girl you’ll ever meet. Unfortunately I forgot her name, I’m bad with names, but I did have to immortalise the moment with a selfie. She was 10 years old, spoke fluent English and was selling strawberries. I didn’t want strawberries but how could I refuse that face? Impossible. I bought a package. Asked her how much they were – she said 20k. I gave her 25k and all good. While Annelien and I wandered around looking at the scenery, our driver decided he too wanted some strawberries. So he had a conversation with the little girl, got some money out of his wallet and bought a pack. There is a silent understanding on Bali that locals pay less than tourists. In some places it’s obvious – such as entry tickets to temples. Anyhow, a few minutes later we got back into the car and rode on. At some point, our driver friend asks us  how much we had paid for the strawberries.  “25k…” I say “…but she only wanted 20k”. The guy goes crazy. “Whaaaaaaat? 20k? That’s how much I paid too. She said she asked you for 30k! That cheeky little monkey” 😀 So that cute little innocent looking girl ripped him off big style. He couldn’t believe it and on the way back, seeing she was still there, he actually opened his window and shouted from the car -“cheeky monkey”. The girl was waving and we were laughing. Certainly the cutest moment on my list of things that happened in Bali. She must have known that after a month of living on the island, I wasn’t just a tourist any longer. 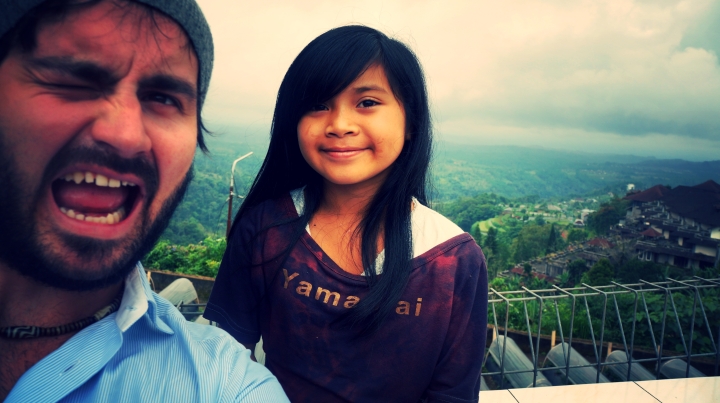 Selfie with the ‘Cheeky Monkey’ 😀

The next stop was a rather unusual one. You might have heard of Luwak coffee? “Bucket List” with Morgan Freeman and Jack Nicholson anyone? No? Well – either way, it’s a very special type of coffee that goes through a rather unique pre-roasting process. The Luwak (civet) eats the beans, fails to digest them properly and then defecates them, supposedly enhancing the coffee. The feces are collected, cleaned, and roasted. It becomes coffee. Mmm…We wondered how on earth anyone could have come up with something like this in the first place. Harvesting coffee from animal pooh? And while no one had the answer on the spot, we found out that Luwak is traced back to Dutch colonial times in Indonesia, specifically Sumatra. Friendly as they were, the Dutch colonists prohibited locals from drinking the coffee that they had brought to the land. Tss Tss Tss. Not willing to give up on their favourite drink, the locals noticed that some species of civets were eating the beans but not digesting them properly so they used their pooh instead. Ta-daaa….here we are time travelling to the future, the Dutch are now only a very numerous tourist group in Bali, Luwak is one of the most expensive coffees you can possibly have, and obviously, locals are not drinking it any longer because they can’t really afford it. “Civilisation” – I think the whole process is called. Or maybe globalisation? One of those… 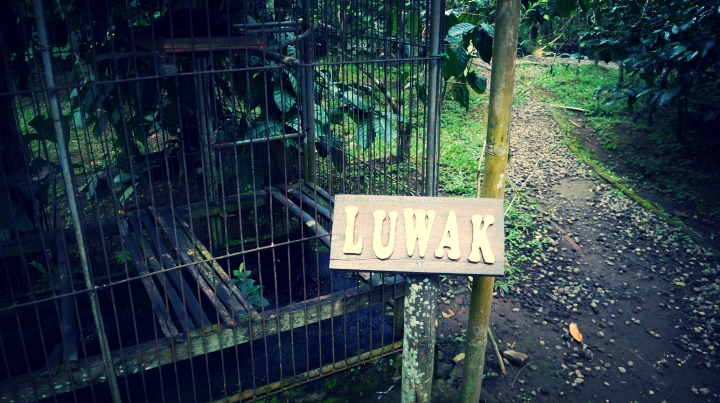 To be honest, the taste was just dull. Nothing compared to Monmouth coffee in London, obviously!  But then I was not impressed with the quality of Indonesian coffee beans in the first place. There’s no way a little animal can eat shit coffee and then shit it out to taste amazing. Not possible.  Annelien who used to be a South American coffee farmer at some point in her previous lives [true story!] also noticed that the coffee trees looked ill. Ahh well. It’s more “for its rarity than for the taste”, they say. And it has medical benefits [that I was not able to find in my 10 min internet search but they claimed that on the farm]. Anyhow – the experience was still grand. We paid 50k for a Luwak espresso and got about 10 other coffees and teas for free. Some were in fact truly delicious. 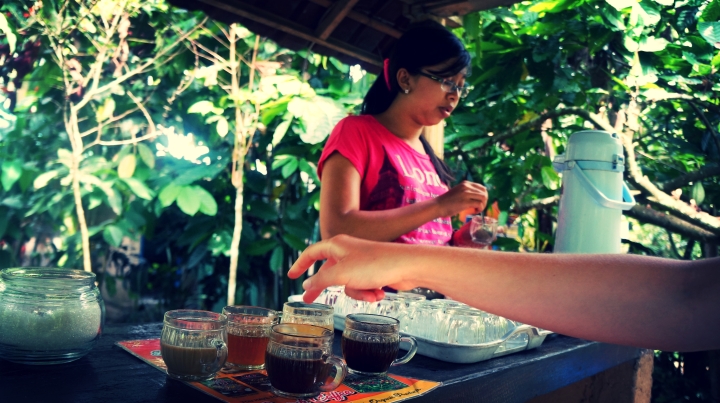 Eventually, we departed feeling like the proud owners of significantly enhanced taste buds. Now we were heading towards Bedugul, to see the temple at Lake Bratan. You might know Lake Bratan and the temple from postcards or imagery associated with Bali. Reaching there, we passed through a beautiful garden and walked towards the lake. 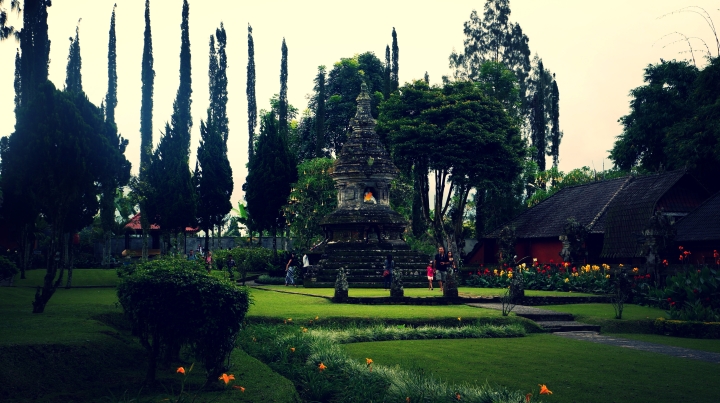 We noticed that a bride was having a photo shoot to our right and since she was getting photographed anyway, I took a picture too. 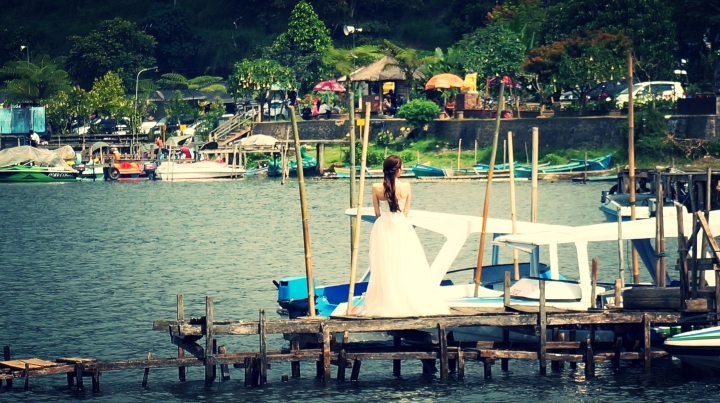 And finally, looking to our left was the temple. It is a lot smaller than you imagine from the postcards but its location in the middle of a foggy lake surrounded by hills and mountains is unique. We posed in front of it… 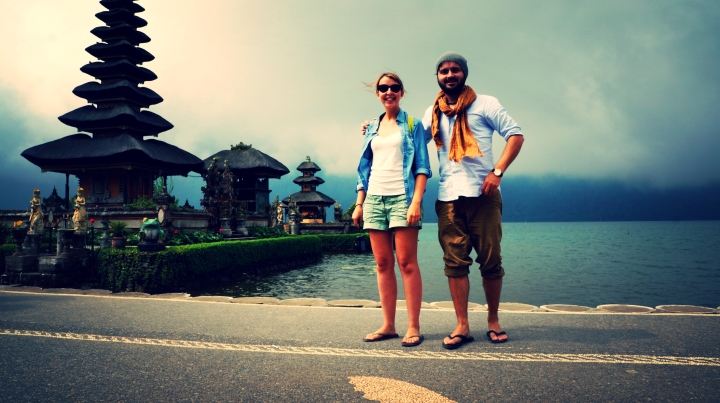 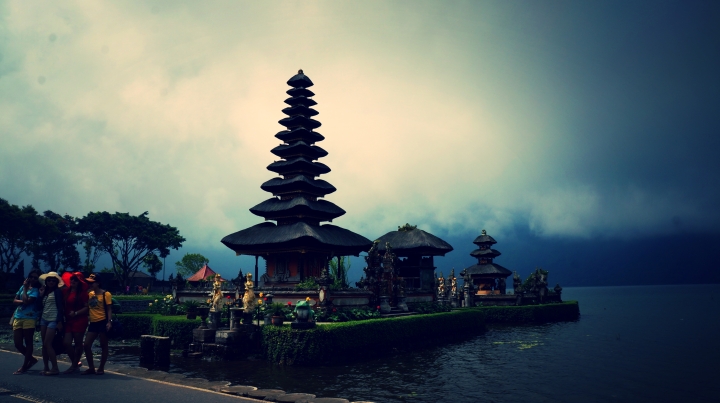 …before I eventually found a good angle. And because I’m a fan of mythology, just a few words about the whole place. The temple is dedicated to one of Bali’s supreme deities – Dewi Danu, the water goddess. It was build because of the lake’s central role in the irrigation of the entire region. Built in the 17th century, it is situated 1200m above sea level, hence the feeling of a spring morning in Switzerland earlier. 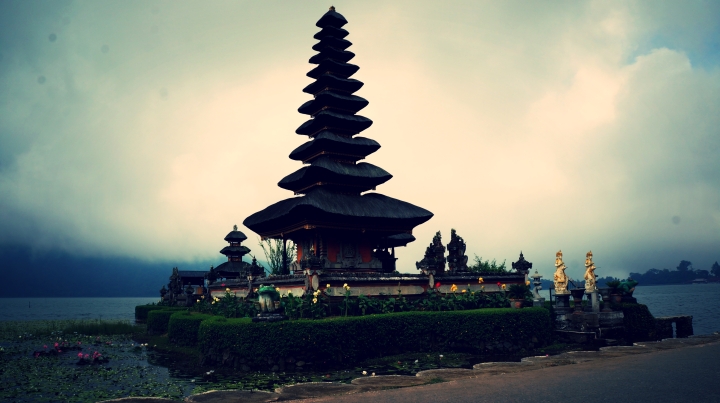 We spent more than one hour admiring the gardens, the lake and the temple. The fog added an element of magic and mystery to the atmosphere and there weren’t that many tourists. I personally think that it’s a great place to take a step back, relax and meditate and was very happy that I had decided to go for it, despite my failed negotiations a day before.

When we moved on, it was about 3 in the afternoon and we were starving. Our driver said he knew just the spot where we could have lunch and when he turned off the engine again, we were in front of a very uninspiring building. We went in and were asked whether we wanted to eat outside. Since it was a bit cold, we weren’t sure but I had a scarf, so why not. We were brought to a table just by the edge of a balcony and the view was this: 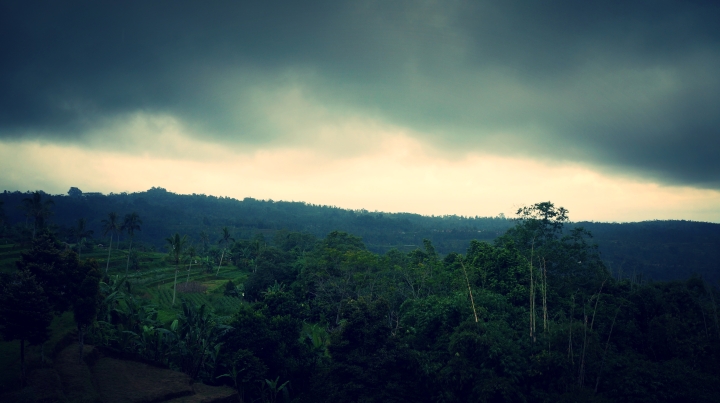 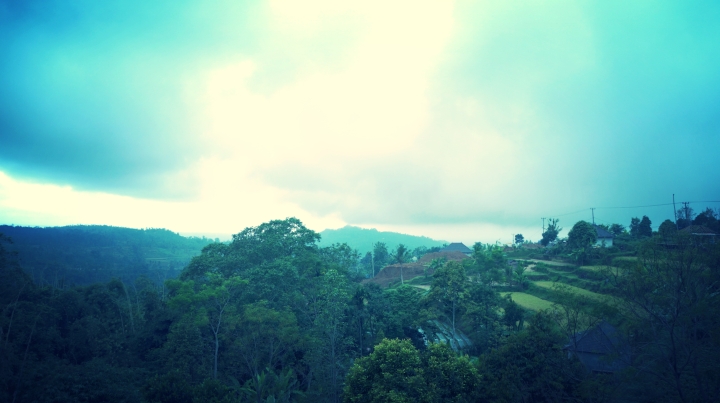 Again – I have no clue where we actually were – but that part of Bali is probably just plastered with spots where you can enjoy views like this. The food was distinctively unspectacular…not complaining too much, just saying.

By the time we left, all I wanted to do was sleep, yet there was another temple on our ‘to-see’ list – Taman Ayun, the temple of the Mengwi Kingdom – one of Bali’s local dynasties that eventually ruled Java. Having read up on the history of the Mengwi, I was expecting a little more from this. It’s still a pretty impressive sight with it’s many towers of different sizes and the gorgeous gardens surrounding it. 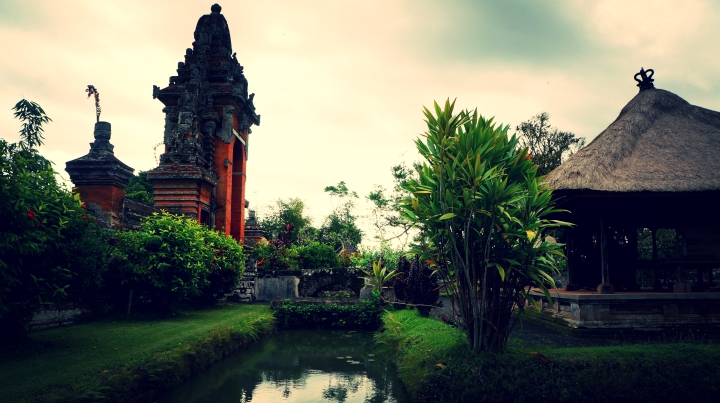 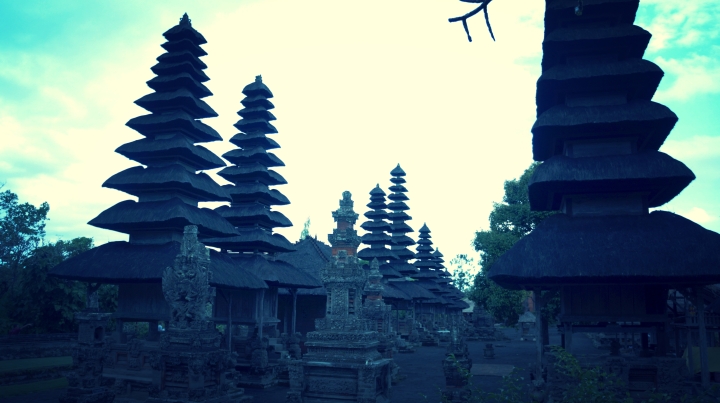 When we got back to Ubud, I randomly bumped into a girl I knew from Gili. What a small world. We drank beer and saw a great live band before watching Germany destroy Brazil at the world cup. It was such a calming and relaxing day which only made me regret the fact that I had not seen more of this amazing island. Yet I knew I was not there to be a tourist. I was there to experience life in Bali. Having spent 2 weeks in Kuta, 10 days on Gili T and one week in Ubud, I felt like I had got a good glimpse. And if there’s anything I know in life, it’s that I will definitely return to Bali, the Island of the Gods.