A post about feeling sick in Paradise…and about really missing home!

Being properly ill is awful. It doesn’t happen to me often, but the few times it does, it has an equally negative impact on my mind as it does on my body. Foremost, it makes me miss home. In fact, it makes me miss a very particular moment of my childhood. I was in second grade, it was winter, and on the last day of Christmas holiday, I broke my left leg while sledging. A long thin line could be seen on the x-Ray – cracking the tibia all the way from the knee to the ankle. I had to stay in bed for 3 weeks. It hurt like hell for the first few days but then I got used to it – and you know what, skipping school and yet enjoying cartoons all day – that was quite a reward for the pain and the patience. So why do I miss this? My mom used to bring me this amazing chicken soup to bed and that moment – that felt like home. Or that’s how I actually define home. Bed. Cartoons. Chicken soup. Being taken care of. Now I’ve been away from home for so long that I can’t even remember; yet that moment always comes to my mind when I get ill.

It’s not too bad this time, I hope. I have a sinus infection caused by diving. I was slightly cold when I went underwater in Gili and that prevented me from equalising properly while descending. My ears were not popping [equalising is all about making your ears pop as much a possible so the air in your sinuses doesn’t pressurise your mostly water-based structures that compose your face. There you go!!!] – it hurt like crazy. But it was all gone by the time I got out of the water, only to wake up with the most monstrous headache I have ever experienced the next day. It was terrible –the right hand side of my face felt like it was going to explode very soon. I didn’t really know what to do…but remembered that cigarettes used to help with pain. So I chugged a handful of painkillers and at 6:30 am I was running around Gili trying to find a store that sells cigarettes. The first opened at 7 and there we go – I bought my very first pack of cigarettes ever. A green Marlboro Menthol and a lighter. 25 000 Rupiah. That is about £1.25. 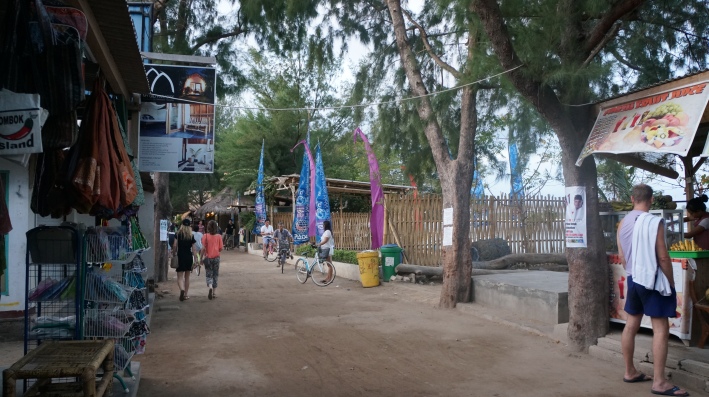 (Gili T – Where The Streets Have No Names)

I opened the pack as clumsily as anyone opens a pack of anything for the first time, pulled out a cigarette and smoked it within seconds. It didn’t help. Smoked another one. And another one. Didn’t help. By this time all these gloomy thoughts came to my mind. “I am stuck on a tiny little island just about to embark on a 3h boat ride with no air conditioning and crazy humidity. Do I have meningitis? Am I going to die here? I don’t want to die here.” Yes – that’s the type of pressure and pain I felt in my head. One more cigarette. By now I was starting to get dizzy. I hadn’t eaten. I had taken at least two parcetamols and two ibuprofen pills and I was smoking even though I am not a smoker.

While stumbling on the empty streets of Gili I bumped into James – a local rasta-hippie. I had met him before – he was the friendliest guy ever. Singer of songs, lover of life…that kind of guy. My second night in Gili he saw me half asleep on some sort of bed in front of the beach and asked me to join him and Sarah and Sophia, play guitar drink some beers listen to some waves crash onto corals.  I told him it was my last day on the island. He looked sad and stopped for a moment. Then he hugged me – “I’ll see you when I see you”. I looked at the girl who was riding a bike next to him at 7 AM and said: “Always with the pretty ones”. He smiled – “Yeah – but this one is the prettiest of all.” She was. I kept walking all the way home – by now having probably my 5th cigarette. I entered the homestay and a fresh water melon, an omlette and a Lombok coffee were waiting for me.

And suddenly – the pain started to go away. It was one of those feelings of total liberation. Of being given a second chance of some sort. Yes, looking back, it was ridiculous, but being stuck on a tiny island with no proper doctors, a little infection can seem a lot worse than it is.

Later I self-diagnosed a sinusitis (thank you Google) and after consulting a doctor friend from home (thank you Facebook) I started treating it with the handful of antibiotics that my dad gave me on the way. Three days later, the unbearable headaches have made way to a constantly running nose. I don’t feel like I will die any second, no. I’m still fucked though. Being ill puts your feet back on the ground. It makes you realise you are not unbreakable and even if you jump from place to place, trip, dive, bike, drink, wake up in a hammock, whatever amazing things you do…you’re still as a fragile as anybody. So while there is a lot of blah blah in here – just some little advice to whoever reads this: Take good care of yourselves and don’t dive with a cold!