Getting lost in Kuta

“You need a visa to get into Indonesia. No worries though, you get it at the airport, it’s very straight forward” – that’s what I remember Johannes or Naomi say a few days before leaving Singapore. And it is, indeed, if your bank card works. Or if you have Indonesian Ruppiah with you. But when I arrived none of the ATMs gave me any money. There were some Dutch guys there with the same problem, yet they had eventually managed to get out some 500,000. Promising. But no matter how hard I tried, none of the ATMs were working for me. Obviously, I found out later that I had given my bank the wrong dates on Indonesia. Luckily, my mom had given me 50 Euros just before I left…and magically, they accepted that big ugly orange note. Even gave me some IDR in exchange, all friendly and smiling in their gloomy dark army uniforms. So there I was, leaving Denpasar airport and heading to Kuta.

Obviously, the taxi driver ripped me off. Instead of the usual 100k, he charged me 200k. £10 for a 30+min journey seemed like a fair enough price and most importantly, I was finally there – KUTA: a surfer’s paradise, home of endless beaches, Bali’s capital of debauchery.

I stayed in a little hotel/hostel type place. They had given me some directions which I had scribbled onto a piece of paper. The driver recognised it and took me really close. I walked for 50m on a 1 meter wide street and was there. The check-in was smooth and the staff there was super friendly. Somehow I recall them warning me about all the potential traps of Kuta, but little did I care. I never care about stuff that is important. All that mattered was that I had finally arrived in Bali. “5 minutes to the left is the beach, 5 minutes to the right are the bars and the parties” – that’s when I remembered why I had booked that place 😀

And despite being tired and convinced that the best thing to do was to sleep, I headed out towards the beach. All I wanted was to smell the sea, maybe drink a beer on the way. The road to hell is paved with good intentions. Or was it the road to the beach is paved with places to stop and drink beers? I did not find the beach…it was dark and the only light I could see was the one of a really cozy looking bar – Stadium Café I believe. They had a lot of screens showing football highlights, and since I had missed the games before, I walked in and sat at the bar. Ohh yes. The staff was all dressed in Brazil shirts and was insanely friendly. The local beer is called Bintang and I had my first one within a minute. Then my second one within 10 minutes. 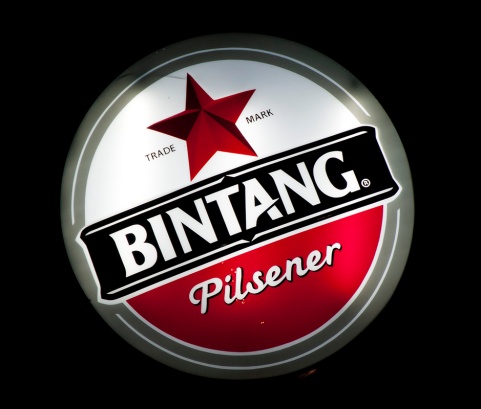 By that time three Australian girls came in and were sitting at a table five meters away from me. They were quite loud and looked a little young…maybe 22 or 23. Also, they were drinking the really boozy type of cocktails – my ultra-experienced eye could easily tell.  I couldn’t be bothered talking to them even though we had lots of eye contact. In the end I was tired and thought they looked a little bit too posh for my unshaved guerrilla terrorist looking face and gold-skeletons army cap. Or maybe I was just too shy. Nevermind, Maddy started talking to me instead. “Oii, stranger! Come sit with us!” I obeyed. It was their first night in Kuta and they wanted a party. It was my first night in Kuta and I had no money. Not a perfect match. Second time lucky, my wallet still had some Thai currency from Bangkok. Wasn’t even sure they’d accept it, but quickly found a money exchange and 2,000 Bahts had magically transformed into 600,000 IDR. Way to go…a beer was 35,000. And that’s how the night began. Jaegermeister shots, Long island ice teas…’Fuck the football game, let’s go to a club’…short taxi ride and there we were in some club, half of it inside, the other half outside. I was buzzing, excited, happy – I had just arrived, yet already partying with some Aussie girls. What more did I want? Maybe I should have wanted to know where I actually was? But who cared about that. A few days later I found out that the club was called Eikon and is one of the trendy places in Kuta to go and have a crazy night out. It was also a max 7 minutes walk to my place. 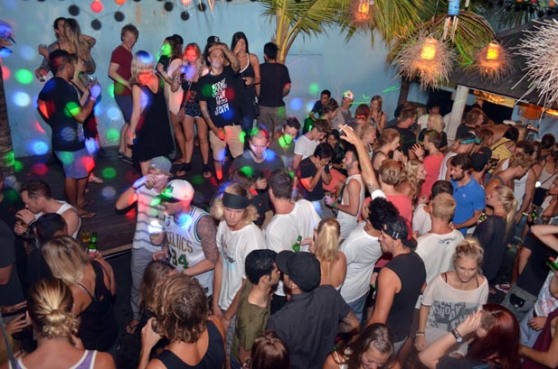 In Eikon I met a local dude who I think gave me a cigarette. Despite not being a smoker, I did tend to smoke quite a bit in Kuta. Anyhow – this guy turned out to be one of the nicest people I met on my trip. At this point, I still had no idea who he was and when Eikon closed at 3 AM, he suggested we went to a place called Sky Garden. Why not? Sky Garden is huge and probably the fanciest club in Kuta. Several levels, gardens outdoors, different style bars, go go dancers and so000 many people having a blast. It felt good. I remember talking to more people than on any other night so far. I also remember not remembering who the hell they were or what I said to them and what they said to me. And at some point, luckily, I admitted to myself, it was finally time to go home. 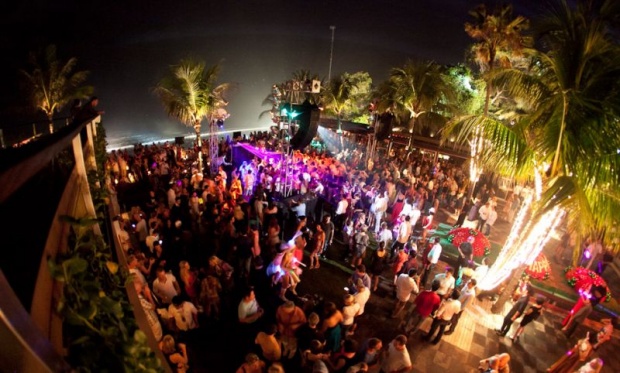 After explaining to a few drivers that I had no idea where I was staying , one of them accepted to help take me there. Yes. You read that right. It was dark and all I could remember was that there was a junction with a KFC not toooooo far. We drove around Kuta for one and a half hours. That is probably enough time to do every street in Kuta back and forth two times and to get to the airport and back. Yet we couldn’t find the street. I had no address, my phone was dead and no one who we asked had any idea. By the time someone thought they might have heard of that little hotel, it was full daylight. And indeed we had found it. The driver expected 300,000 IDR. By all means that is A LOT of money in Kuta but I still had no clue how much it really was. Also, I would have happily paid if I had that money. Just that with my card not working and the Thai money all used up, I had exactly 80,000 in my wallet. He started screaming and shouting at me. Weirdly enough, all I could think about were the foxes that lived in my neighbourhood in London. Those foxes made the same squeaky noises at the same times of the day. Especially one of them, the one who’d always stare at me when I was getting the cab to the airport on Monday mornings. And here I was, on Bali, 12,000km away from home, just about to have a fight with a squeaky fox-like-sounding scooter driver. I gave him the 80k and went into my little hotel. I could still hear him from inside, swearing, crying, screaming or whatever it was he was doing. Falling asleep was not a problem though and I slept like a baby. Little did I know that I’d see the driver again. Not only that, I’d also see the Australian girls again, and the the local guy, and the English surfer-dude from the bar who had a one year old daughter at home and had left her to surf in Bali, and the Kiwi 40year old woman at looking for some local love… Where did all these memories come from suddenly? The following nights were a lot bigger than this one. Having arrived in Bali that day though, and being ‘welcomed’ quite like that – well, I guess I had to make a note of it. 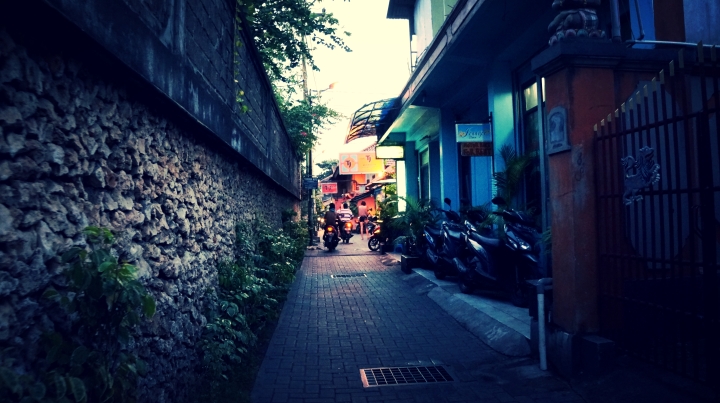 No matter where you are, always know where you live. Otherwise, if you’re lucky, you can always crash on the beach and you only wake up with a mild hangover. If not, well…a lot worse things can happen.