Ali and the curse of being the greatest

I spent the last 92 minutes watching a documentary on Muhammad Ali. Former opponents such as Joe Frazier, Sir Henry Cooper, George Foreman, Larry Holmes…they were all speaking about what it felt like to be in the ring with Ali. Now I must admit, I do have a predisposition to cry a little during movies about war heroes, sportsmen or generally speaking, people who achieve the ‘greatest’ things. Say Braveheart. When Mel Gibson shouts ‘Freeeeeeeeedom’ just before being decapitated…each time I see that, I lose control over my lacrimal glands and tears start to run down my face like I was a teenage girl hearing for the first time that the Backstreet Boys have split up. I even cried during Avatar. Can you imagine?  Now you must be thinking – ‘He definitely lost it during the Ali movie’. And indeed, a couple of times I was close. Very close. When you hear Joe Frazier (who is dead by now) say things like ‘he was a great man, he deserves the best’ I struggled really hard. But no, I kept myself together and managed to not cry this time. Yet seeing those images of Ali from his glory days contrasted with the wreck of a human being he is now…well, that was not easy. 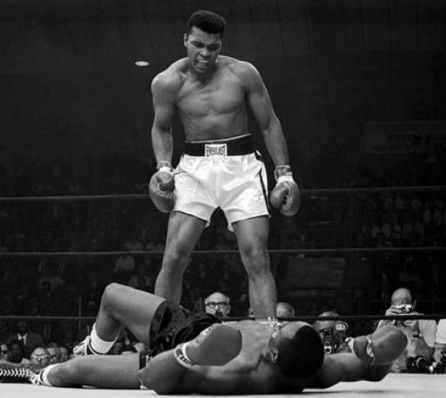 And it made me wonder…

And then, there are Maradona’s drug problems, Pistorius shooting his girlfriend, Tiger Woods’ sex scandal… I’m sure I can think harder and come up with others. Sports isn’t even the only area – what about  the whole 27 club in rock ‘n’ roll? The greatest guitar player of his generation, a genius poet singer, the best female voice of all time (by that I mean Janis Joplin rather than Amy Winehouse)…and this goes on. Even writers aren’t safe. Say – Albert Camus – dead in a car crash.

Of course, to every Senna, there’s a Prost, to every Mardona there’s a Cruyff, to every Jim Morrison there’s a Bob Dylan, to every Kurt Cobain an Eddie Vedder  and to every Camus there’s a Guenter Grass. Still – being the greatest, that comes with a terrible price tag. And that just bothered me… So I blogged about it. That’s what bloggers do, in absence of greater things, I guess.